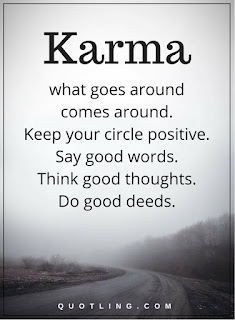 Does anyone understand Karma these days, does anyone respect the meaning of friendships and relationships. I don't think so.

Recently I found out something that tore my heart out of my chest, it's a feeling I cannot explain. In my previous relationship, I started growing relationships with certain people because I got to know them through my ex. To my surprise one of these woman pretended to care so much for my son and I but yet she was helping in tearing my home apart. This woman should know how I feel because she is a divorcee and she has a child. I don't understand woman that do things like this. What woman does not give herself time to heal, especially if she has a child. What woman can introduce her daughter to a new man and her divorce or separation is so fresh. As much as us woman will try to stand for each other; we will always have a 10% of woman who will break homes, have affairs, or hurt one another.When Karma comes and things are  going wrong we start asking God why, forgetting of all the bad we do on earth. What goes around, does come around. The thing is with these woman is that now that they have the man, they will not even lead him into the right way, he will stop maintaining his kids and she will be ok with it. Why - her own security and selfishness. But in time Karma will deal.

Woman don't get taken seriously because we are always bickering, we always hurting one another instead of helping each other. I was recently approached by a very well dressed, independent man, he wanted to start dating me, but I knew he has a girlfriend already, I cannot do that to another sister. This man kept trying, wanting to take me away for holidays or sending me random messages of how much he cares for me, he wanted me to live a lie with him and start making time for him.
But because of the person I am, I will never put another sister through that. I rather be alone than be a side chick OR hurt another woman in such a way. I know Karma and I know what it can do..

Little does this woman know- that things like this do not last, she will get her rude awakening...